Originally posted on Em:
Fanfiction. Feared by all. Mothers hide away their children, teenagers joke and laugh or run for the hills. Most people probably won’t even know what it is. But I do 😉 Of course, I’m joking, fanfiction isn’t really that bad. It is not a monster of any description, nor is it dangerous…

END_OF_DOCUMENT_TOKEN_TO_BE_REPLACED 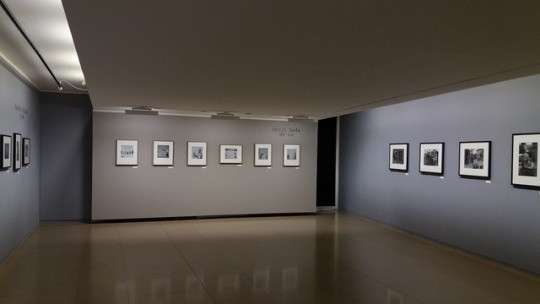 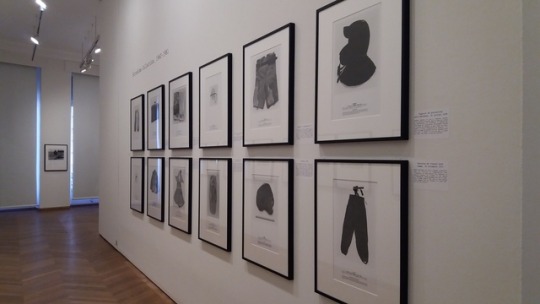 Among all exhibitions I have ever visited, this is one of the hardest to take. Japan, after World War II.

It has just rained, and there were not many people. It was mostly quiet. The exhibition is divided into five parts, showing photos taken by Japanese photographers after the War. Not all photos were taken in Japan; some were in the US, Hong Kong, and the UK, but they didn’t hit me that much. I mean, of course they are very good works, and they preserve a certain period of history so that we can learn about that time today, but during the whole visit, for me, these photos of joyful scenes outside Japan were more like a break from the sight of the aftermath of the explosion.

There are pictures of items, ruins, animals, and people. The clothes were burnt, the bottles were melted, the food was carbonised. The houses were turned into pieces, the parks were covered in ashes. Beings were hurt, killed, or left alive with pain and scars. It’s sad, but I couldn’t even shed a tear. When reading the sentences that victims have written, images appeared in my mind, and it was terrible. Some people smiled, some cried, screamed, some just stared at the camera, their eyes blank. The effect of what happened to them erased all emotions. The atomic bombs finally made the victory of the War, but what did it really bring? Whose victory was it? And who took the suffering of the losers?

This is the absurd side of war. When I was in Bordeaux this summer, I remember meeting a guy who apologised for thinking that I was Japanese. He thought that it was offensive to me, since I later told him I was Chinese. I’m not blaming him; a lot of people in China thinks the same. I’m just saying that the past is the past, and there is no reason hating a nation just because so many years ago, when many of us were not even born, some of them became devils. Most people don’t want war, but when the fighting starts, you can’t sit aside and go, ‘I’m not in, because I don’t like it.’ It’s not up to you.

So in the end, those who don’t want to fight are sent to kill, but they don’t necessarily enjoy the victory.

END_OF_DOCUMENT_TOKEN_TO_BE_REPLACED 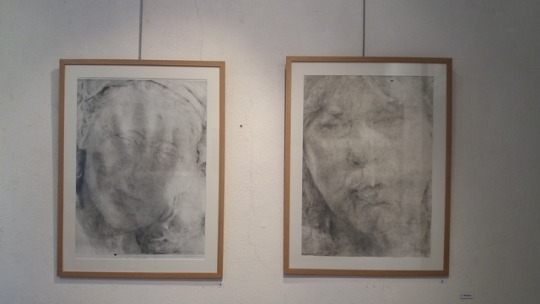 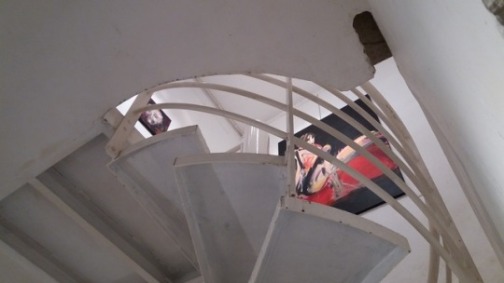 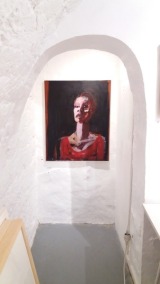 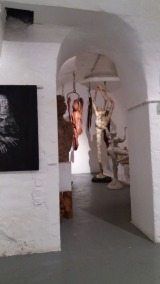 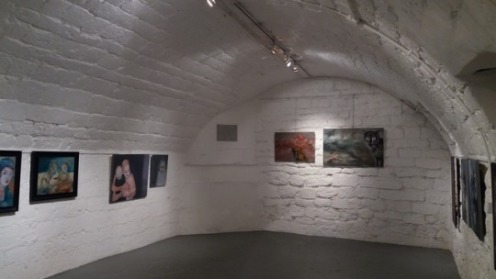 It’s still because of a newsletter from Sarah Navasse. The gallery is on a little road in the Marais, and it’s easy to go be ignored. The inside is not large either, but the atmosphere is quite interesting. There’s the ground floor, then some spiral staircases that lead to the basement. The whole place looks old but neat, and loads and loads of artworks are in stock.

At the reception was a friendly old lady and a nice girl who could speak English. The entry is free, and there are some books and postcards for sale.

The title of the exhibition is ‘regard’. It’s not the English word; it’s a noun in French, and it means ‘look’. I didn’t know what to expect at first. The displayed works present different looks in the eyes of different people, or even mannequins (Alain Nahum). There are paintings, photos and sculptures; in some works, you can distinguish the eyes, in some you can’t, but you still feel the stare. It’s a bit like a nightmare in the basement where you’re surrounded by paintings of eyes fixing tensely on you, but at the same time, when you get over it, it’s fun to observe all the looks, to ‘stare back’. I don’t deny that some works are really horrifying, though. I haven’t done any research on any of the works, so I was only imagining what the artists were going through when they created those pieces. Several constantly reminded me of depression or some other psychological problems.

Still, I really like this exhibition. When I was younger, one of my best friends, Eva, once told me that when she was bored, she’d observe everyone in the street, and she would find them very funny and would laugh so hard. I mean, when we really watch carefully, we find that everyone has a certain way of looking at other people and things, and through their looks are conveyed their attitudes. Then, different people take different looks differently according to their own style, according to how they observe the looks. I think that’s the point of this exhibition.

END_OF_DOCUMENT_TOKEN_TO_BE_REPLACED 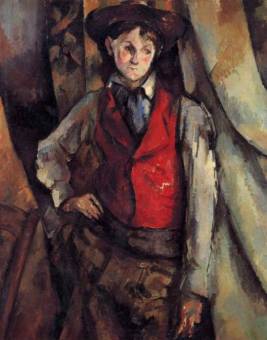 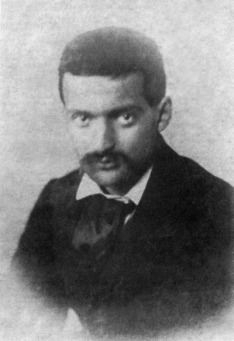 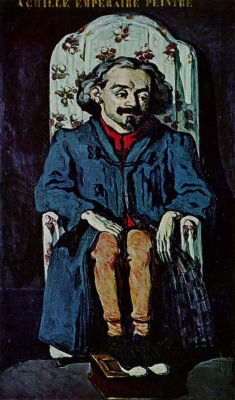 Curator Xavier Rey, Director of the museums of Marseille

I hadn’t paid special attention to the portraits of Paul Cézanne until this exhibition. During his career, though, he has painted almost 200 portraits, among which we can see himself. his wife, his family, and his friends.

The first was a self-portrait based on a photo. Honestly, it scared me at first look. There is no doubt that with the strokes of bright red colour, the way the eyes stare, the greenish grey shade of the visage, and the dark background, the painting says much more than the photo.

Cézanne painted people with efficiency and simplicity, but always getting the spirit of them, giving his portraits an interesting comical touch. The wide strokes and thick paints, the mixture and contrast of colours, the relations between the figure and its environment, the dark and clear contours, these are the characteristics that appear in most of his oil portraits.

My personal favourites also include a sketch of a bust of a man. It’s a very quick sketch, not so detailed, nevertheless precise and clean. It’s the same with his paintings, be it portraits, still lives, or landscapes. They are not as detailed as classical works; only the most vivid were kept.

The exhibition is not a very large one, but is indeed a great collection of carefully selected portraits by Cézanne. A chronology of  events throughout his lifetime is also presented, like at the exhibition of Frédéric Bazille, but in the middle instead of the end. With this chronology, and as you think about all his paintings, it can be seen how his artworks changed through time, while some things still stayed the same.

END_OF_DOCUMENT_TOKEN_TO_BE_REPLACED

If you enjoy this video, then you’ll L-O-V-E today’s heirloom! https://www.youtube.com/watch?v=cKYObgvfKPA Friday Heirloom 3 takes you to Temple Bar, Dublin’s cultural quarter. What you just viewed was a video presentation of Tradfest, a large music festival run in January in the city of Dublin as a means to activate the winter period and usher in the…

END_OF_DOCUMENT_TOKEN_TO_BE_REPLACED

I learned about this exhibition from a newsletter from Sarah Navasse Miller whom I met during the portes ouvertes in Belleville. We have talked a bit, and she told me she did oil painting before, and that was why in her artworks with graphite and pencils, she represents the light very naturally.

Initially, I went to this exhibition to see her art, but in the end it didn’t really disappoint me that there was only one of her works. This whole thing is very inspiring.

The first impressive thing about this exhibition is the variety of techniques. Drawings, paintings, sculptures, embroideries, with pencils, graphite, oil, ink, gouache, watercolour, on drawing paper, book pages, canvas, tracing paper, bubble wraps, plaster, shells, bones, whatever you can think of. This was what amazed me when I first walked through the gallery.

There were lots of other great works, and it was fun seeing how erotic objects and scenes were being depicted artistically. There were sex scenes of octopuses [Ingrid Baudine], nude anatomic bodies of humans and wild animals superimposed over each other [Tamina Beausoleil], ‘formless’ plaster sculptures in which fingers can be distinguished [Fabrice Cazenave], organs / organic bodies / humid things [whatever they are] twining together [Marjolaine Ciavaldini], hands at certain body parts drawn in several continuous lines [Claudie Dadu], bulls alone or together having sex on scapulas of veals [Julie Dalmon], plants combined with nude bodies [Fanny Gosse], collage of nude body parts [Chloé Julien], apparently disordered lines, shapes and colours [Orsten Groom], and many games of shapes.

END_OF_DOCUMENT_TOKEN_TO_BE_REPLACED

As the title goes! I’m still trying to figure out how this thing works with the experience from Tumblr and AO3.

END_OF_DOCUMENT_TOKEN_TO_BE_REPLACED

SO THIS IS FINALLY DONE! GELPEN ON PAPER, COLOURED WITH COREL PAINTER 2015.

END_OF_DOCUMENT_TOKEN_TO_BE_REPLACED

DREW CLEAR OUTLINES WITH PENCIL + CREATED THIS HAIRSTYLE! I BET NO STYLIST WOULD LIKE TO DO THIS BUT OKAY…IT LOOKS NICE ON PAPER LOL. + I’M PROBABLY SUBMITTING THIS ON DEVIANT ART FOR PRIDE MONTH!

BTW…AT FIRST I TAGGED THAT IT’S FEMALE BUT NOT NECESSARILY MAYBE? I DON’T KNOW I JUST DRAW LIKE I USED TO. WHO CARES WHAT SEX THE PERSONAGE IS.